At the beginning of the 14th Century the bycocket (byecocket, bycoket, and many other variations in English as well as “chapeau a bec” in French) came into fashion. This is a hat worn by both men and women, often while riding, hunting, or hawking. The hat is made with a tall crown that has an upturned brim which projects sharply at the front into a point. The bycocket is also depicted in heraldry of the time and mentioned in writings related to the granting of Nobility.

My goal was to create a 14th Century Cap of Maintenance suitable for a Peer of the Realm, specifically a Pelican. Unfortunately, there are no extant examples that I have been able to find and the written descriptions are not detailed enough to determine construction methods or materials. Due to the lack of extant examples I have based my recreation on illustrated examples from period.

The bycocket is frequently depicted in imagery of the time period, one of the clearest examples is found in the margin of The Decretals of Gregory IX c.1300-1340, written in Southern France (page 40v). This image shows a man wearing a red cap with
a white lining but no other decoration.

Another image with the same hat style and coloring appears in the 1344 painting The Effects of Good Government in the Countryside by Ambrogio Lorenzetti. This image shows a woman wearing a red cap with white lining and perhaps decoration on the upturned brim. 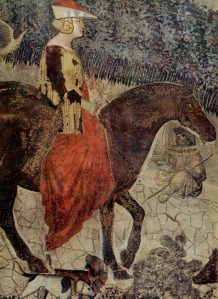 The majority of visual depictions are shades of red to purple with a few in the blue/green range. My research did not result in examples in un-dyed sheep or plant fiber colors but it is possible that they were made.

The Cap of Maintenance appears in heraldic illustrations starting in the 14th Century as well. It is usually depicted as a red cap lined with ermine (there are a few instances of an ermine cap lined with red also) and placed atop the arms of nobility. The heraldic depictions however have the point toward the back instead of the front and often also show some kind of mantling. I am unsure of the reason for the difference between heraldic representation and portraiture.

This example from a French armorial made between 1401-1470 shows two arms with Caps of Maintenance. The large one in the top left is that of the King of England and the arms in the center of the bottom row are of the Earl of Oxford (likely John deVere but perhaps his father Richard or son John, all Earls of Oxford at various times in the 14th C).

The heraldic achievement shown below is of John Beaufort, 1st Duke of Somerset, as shown on his Garter stall plate in St. George’s Chapel, Windsor. He was Earl of Somerset by heredity and in 1443 was created Duke of Somerset and Earl of Kendal, made a Knight of the Garter, and appointed Captain-General of Guyenne by King Henry V

My recreation is made of fulled red wool, lined with white linen, interlined with stiffened canvas, and trimmed with ermine skins and tails.

The basic shape and measurements are shown in this drawing. 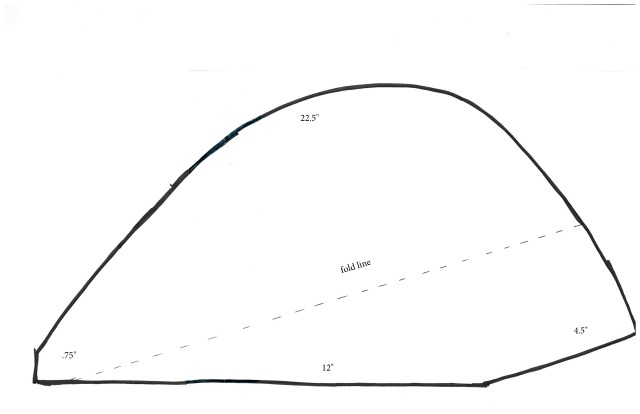 I cut two of each for all three layers, allowing for ½” seam allowance on the wool and linen and ¼” seam allowance on the canvas interlining. The center seam on the wool layer is sewn with a backstitch in red silk then folded over and whipped stitched down to create a strong flat seam. The canvas interlining is sewn with a simple overlapped seam using cotton thread. The linen lining is sewn as the wool outer layer using a backstitch then rolled and whipped in place to maintain strength. 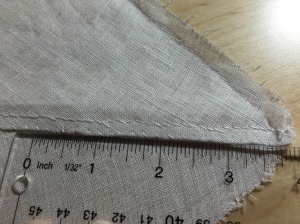 Inside of linen lining

inside of wool layer

The three layers are then stacked together and the lining sewn into the wool with a hidden stitch. After all the layers were assembled I did a running stitch through them along the edge to secure the interlining and prevent shifting. The ermine skins plus additional ermine tails are trimmed to fit using a sharp blade and then surface applied to the upturned brim.

After completing the project I am not entirely convinced that the hat was made in two pieces from woven fabric in period; it may have been felted in one piece from unspun wool. I plan to make an attempt in that fashion also and compare the two results.

Burke, John. A General and Heraldic Dictionary of the Peerages of England, Ireland, and Scotland Extinct, Dormant, and in Abeyance. London: H. Colburn and R. Bentley, 1831. Print.

The Manual of Rank and Nobility, or Key to the Peerage: Containing the Origin and History of All of the Various Titles, Orders, and Dignities of the British Nobility, Etc. London: Saunders & Otley, 1828. Print.