The earliest recorded evidence of the production of soap-like materials dates back to around 2800 BC.  A formula for soap consisting of water, alkali, and cassia oil was written on a Babylonian clay tablet around 2200 BC.  The type of fat and lye used will determine the hardness of your soap.  Black soap, derived from wood ash lye,  was a common soft soap used for general cleaning, laundry, and by the lower classes.  White soap, derived from marsh plant ash, is a hard soap that was highly prized due to being more difficult to make.  Hard white soap was often grated and re-melted with various oils and additives to make a luxury product.

Many soap recipes remain from the Middle Ages but I chose the following recipe from Secretes of Alexis of Piemont, written in 1557, as it contains exact measurements.

To make black Sope for clothes, with all the signes and tokens that it giueth and maketh in beiling.

[…]Use 3 pounds of egg bearing lye to 1 pound of oil, pour the oil in and stir and mix well. Do this in the evening so that the infusion can stand overnight. In the morning start to simmer it, for seven to eight hours; if it is over 100 pounds simmer ten hours or more. When it starts to simmer and rise up a lot, take it from the fire and stir it well until it starts to go down again. Keep stirring so it does not get burned to the bottom. When you use a cauldron leave a hand width of space because the soap rises and swells in cooking and oil would be lost. The more it is stirred and the oils incorporate well with the lye, the sooner it simmers. When it has simmered for about eight or nine hours it is time to take samples and check. Make sure to have some first and second lye ready as needed. When it has boiled until the right time you shall see it become thick, and make long and thick bubbles when simmering. To take a sample, take a little with a spoon and put it on a small earthenware dish and let it cool. Then cut it with a little stick and if it closes again it is a sign it has cooked enough; if it does not close, it is not finished, so keep simmering it. Take many samples and check. [..]

Now that I have a recipe I need lye and oil!  Since I have a wood burning stove for my home heat source I decided to distill my own wood ash as well as render down saved beef fat for tallow.

I collected the ash from my wood stove for several months, until I had a large pail full.  The ashes are then sifted to remove any unburned wood and remaining coal.  I don’t have a photo of the sifted ash but it is a very fine powder.

The sifted wood ash is packed into a bucket with a quarter size hole in the side just up from the bottom.

Fresh rain water is then poured over the top of the ash in small quantities.  The jar collects the lye water that drips from the hole.

It is a little hard to tell in this picture but the jar on the left is the first one and the color lightens as more lye is extracted from the ash.

I collected raw beef fat trimmings and stored them in the freezer until I had about 5 lbs. 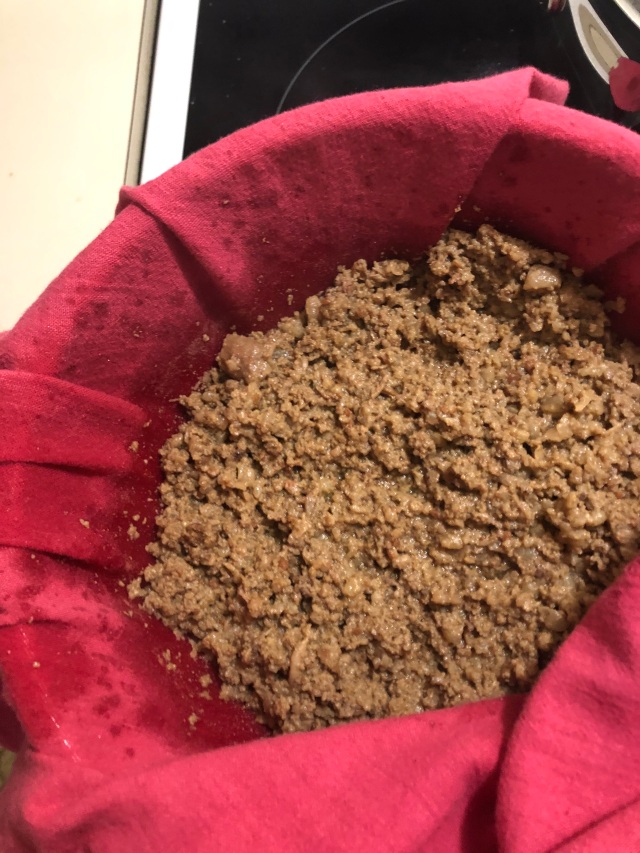 The beef fat is grated and slowly rendered down over low heat.  Any remaining meat and connective tissue are strained out. 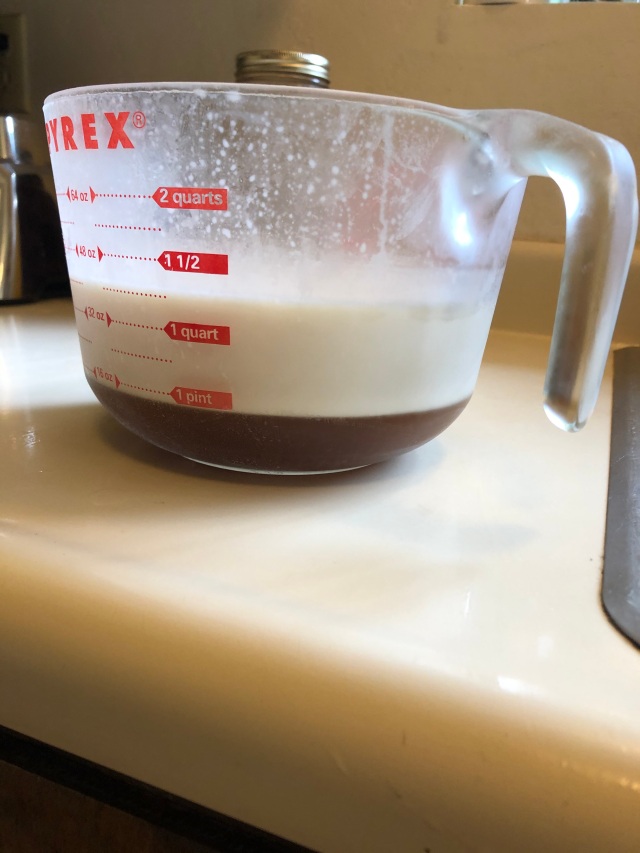 The rendered fat is placed into the refrigerator overnight.  The white portion is pure tallow and the brown is the last of the unusable broth.

I now have just shy of 1/2 gallon of lye and a quart of tallow.  These are combined by weight (3 lbs. lye to 1lbs. tallow), stirred very well, and set to simmer for several hours. 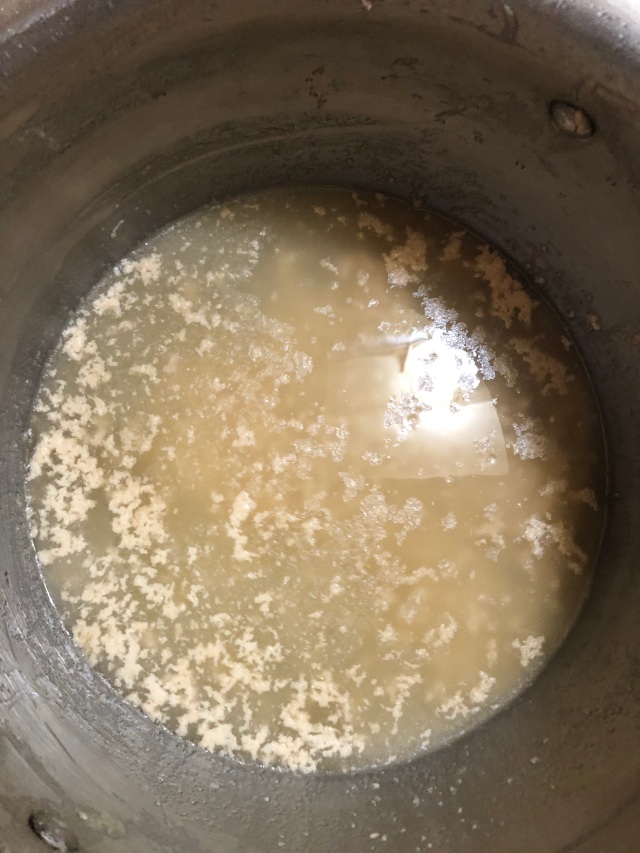 This is NOT what was supposed to happen!

After simmering for several hours the product separated, like a broken custard curd, and was a complete FAIL.

I think my problem started at the very begining.  In my impatience I ran the rainwater through the wood ash too quickly, not giving it enough time to leach the lye properly.

Luckily, I still have a wood stove and still eat beef so I have the opportunity to try this again!

← Zen 2.0
Cut and Construction of the Finnish Eura Underdress →