According to the Merriam-Webster Dictionary, a comb is “a flat piece of plastic or metal with a row of thin teeth that is used for making hair neat.” The word originated in Middle English, from Old English camb; akin to Old High German kamb comb, Greek gomphos tooth and the first known use of the word is before the 12th Century.

People of all social standings have used combs in every day life for grooming since at least 3500 B.C. Similar objects have been found throughout Europe, the Mediterranean, Africa, and India. According to the Egyptian historian al-Maqrizi (1364-1442), the trade in Egyptian combs was so extensive that a souk (market) was dedicated to it in Cairo. Combs are also used to groom horses and prepare fibers for fabric production.

The first European combs were made of a single piece of antler or bone with teeth cut into one side. Medieval combs were usually made of ivory or wood. The most common wood to be used was Boxwood (Buxus sempervirens), which is used by many modern wood carvers.

Beginning in the early 1200’s the single sided comb was generally replaced by a double-sided comb, commonly referred to today as an “H” comb due to the shape. The H comb typically has two different densities of teeth varying from 4.5 per 10mm on the course side to 9.1 per 10mm on the fine side. Another characteristic of the H comb is that the center spine is thicker than the edges, often about 6.5mm, no matter what the overall size of the comb is. This gives the teeth a wider base than tip and strength to prevent breaking.

There are extremely varying levels of complexity in decoration as well as size and shape. Several extant examples of highly decorated and carved wooden and ivory combs from the Renaissance period are in European museums. It is also supposed that combs were given as love or betrothal gifts in the later middle ages as some have inscriptions including “I give it with good heart” and “I give it”.

This image from the Lutrell Psalter (1320-1340) shows a woman grooming with a double-sided comb and the help of another woman.

This comb from 14th C Cairo is decorated with carved motifs including a fleur-de-lys, perhaps an influence of the Crusades. 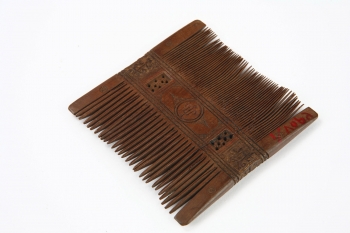 The combs below are extant examples from Novgorod, Russia dating to the 10th-14th C.

The combs below were retrieved from the shipwreck of the Mary Rose, King Henry VIII’s warship that sank in 1545 and was raised in 1982. A total of 82 combs were found aboard the Mary Rose, of those all were wood (mostly Boxwood) except one of ivory and one of antler. One of the wooden combs also included a leather cover to protect the teeth.

I chose to make a simple wooden comb suitable for a lower class medieval European person to enter into the woodworking competition at West Kingdom 12th Night in January 2016. My first step was to acquire the appropriate wood. I ordered a piece of Boxwood on-line as I couldn’t find a local source. Boxwood is often used for carving figurines, musical instruments, and block prints.

I started by using a handsaw to cut a piece out of the larger block. After cutting the rectangular base I used a chisel and course sandpaper to create the basic shape. 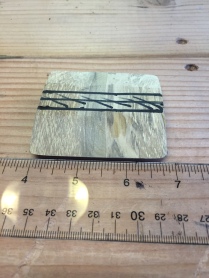 After cutting the teeth I used successively finer sandpaper to smooth and even the teeth and comb overall. I started with 100 grit paper, moved to 220, and finished with 350. I then washed away the sawdust and coated the comb with a food safe mixture of seed oils and lemon oil used on wooden cutting boards.

If I were to make another comb I would create a jig of some sort to guide the blade while cutting the teeth to make them more uniform. Most scholars that I read believe medieval comb makers used a saw with a guide that fit into the previous tooth cut to keep the spacing even.

I also made a simply leather pouch to protect the comb. There is only one extant example (from the Mary Rose) that I can find and there has not been much research done on protective pouches so I made my best guess as to construction. It is a simple envelope made of supple leather sewn with waxed linen thread.