When one visualizes a 16th century German, the first thing that comes to mind is “slash and puff.” It was a century of adornment and extravagance in dress. Nowhere is this as obvious as in the headwear of the times.

By the end of the 16th century, German headwear could run from the relatively simple, practical caul to the absurd proportions of a tellerbarret adorned with pins, slashes, and ostrich feathers imported from Africa. Even within each type of hat, there is incredible variety. Any of the hats depicted could be anything from a simple linen construction to an over-the-top confection of feathers, embroidery, velvet and gold

In this presentation I have attempted to reconstruct five of the most common hat designs. Unfortunately, there are very few extant pieces, and many details have to be assumed or interpreted from period documents such as inventories or wills, and from art. Fortunately, the art of the time tended toward extreme realism and many construction details can be seen in woodcuts and engravings.

Head coverings among the lower class and mercenaries are presumed to have been made of wool and linen, often adorned with ostrich feathers. The upper class appears to have used finer wools and silks, and in addition to feathers the hats were embellished with brooches, medallions, embroidery and pearls.

The caul appears to be a very simple soft cap worn by men. It is seen alone and worn under other hats. They predominately seem to be made of velvet or another very soft material and range from very simple to elaborately decorated with gold work. 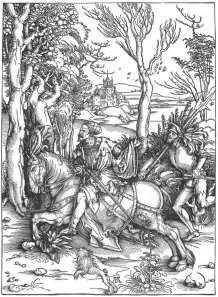 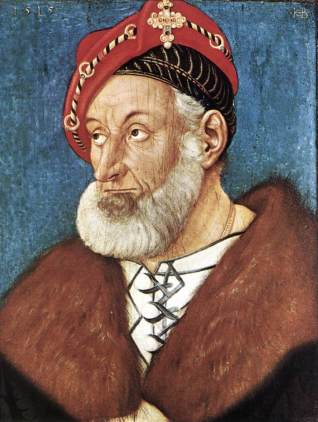 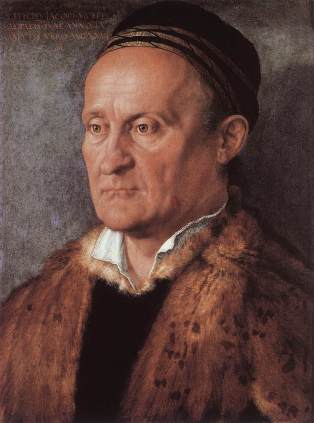 While the example shown on Cardinal Albrecht appears to be of a stiffer material (likely felled wool) I have included it to show what I believe the construction lines to be.

For my version I made a conical pattern by dividing the head circumference into fourths. I used silk backed rayon velvet as I could not find 100% silk velvet. I added a 2.5” band of velvet at the bottom as a cuff. Unfortunately the cuff is a little hard to see in these pictures.

The schlappe is an arming cap most often seen worn by the Landsknecht mercenaries and lower class men. Arming caps have been worn under helmets through history to pad and protect the wearer from the metal. Previously they were constructed in two or three pieces with the seams running from brow to neck; these appear to be constructed with the seam running around the circumference of the head. This change in construction allows for a padded roll to be inserted helping to support the weight of the helm. There are examples that appear to have the padding and others that appear to be unpadded

I think that over time the schlappe and the soft brim barret combined into what is now commonly known as the “starfish” hat. From there it sometimes reached the proportions of the large tellerbarret. 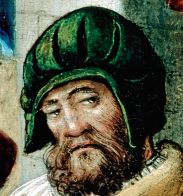 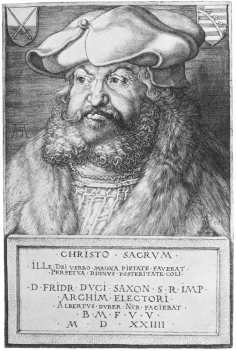 In these examples there appear to be a couple different cut and construction options. The final image shows what I believe to be the construction lines with a round piece for the crown and a straight piece that goes around the back from ear to ear.

Funny thing about how I made mine… I did it wrong the first time. My first attempt was based on the standard three piece coif I have seen and made in the past. I cut two matching side pieces and a center strip that goes from brow to neck from mid-weight wool. I assembled it and cut slashes around the brow line then lined it with the same three piece pattern cut from linen. Unfortunately, the slashes just didn’t do what I wanted them to do; they didn’t splay open at all. 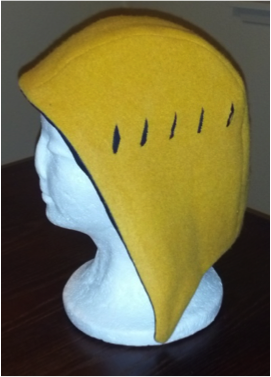 Back to the drawing board (this time with process pictures!)…

My second attempt was much more successful. I again used a mid-weight wool and linen lining. This time however, I cut an 18” diameter circle of wool for the crown and a 14” diameter circle of linen for the lining. The back piece is the same for both face fabric and lining. I cut a 5”x30” piece from the same linen as the lining, sewed it into a tube, stuffed it with poly-fill batting, and sewed the ends to each other to make a circle. This would likely have been wool fleece in period but I didn’t have any available.

Once the circle for the crown was cut I marked a line 2.5” from the edge and then marked that line every 1” for my slashes. The slashes are about 2” long. I then pinned the crown to the base and sewed it together. I attached the lining crown and base the same way. The roll is then inserted into the crown and the lining stitched in. 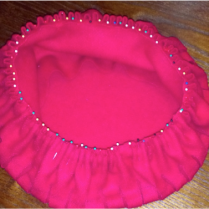 Schlappe – crown pinned to base The split brim barret appears in period depictions in an array of sizes and details as diverse as the tellerbarret. This hat is worn predominantly by men, usually of the middle or merchant class, but there are some examples of women wearing them.

This hat is generally less decorated. There are few ostrich feathers, embroidery, or hat badges. One predominant feature is that the split in the brim is always front over the back. It does not seem to matter the depth of the brim or the height and width of the crown, the split remains the same. There are examples of multiple splits which I believe adapted with the schlappe into the “starfish” hat. There are even examples where the front brim is gone completely and the sides are held up with a ribbon or band over the top of the hat. 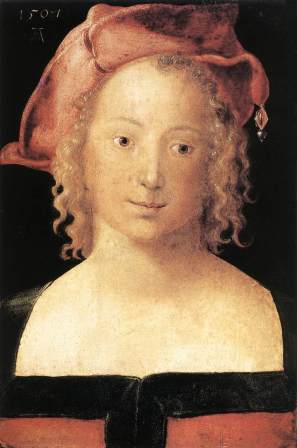 How I made mine

The crown of my split brim barret is made from the same pattern as the caul but of coat weight wool with the addition of a 3” brim. I have lined mine with linen for the comfort of the wearer but I have no evidence on if they were lined in period or not.

To support the weight of the brim I have added cords with brass aglets. There are several depictions of ribbon or cord holding the brim up. If I were to do this hat again I would make the brim twice as wide and double it on itself to give more rigidity. 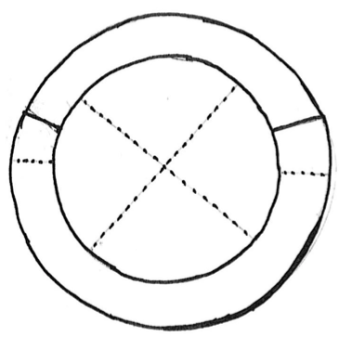 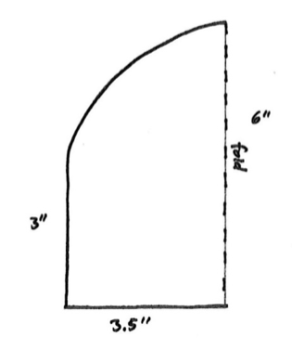 The wulsthaube was worn by women of all classes, often alone but sometimes under a tellerbarret. These headdresses varied greatly in size and shape; from small upside down U shapes to very large almost ball shaped ones. The wulsthaube was covered with a steuchlein which varied from close fitting solid ones to looser sheer veils, sometimes with a pattern woven in.

I started by experimenting with the wulst. My first try was a piece of linen about 25” by 12” at the widest point and tapering to 3” at the ends. This proved to be ok but shorter than I wanted for this application. My next attempt was about 35” long and about 11” across at the widest part. In addition to the outer curve I cut a piece about 6” by 1.5” from the inside curve of the circle. I stuffed the roll with wool fleece and overlapped the ends to make a circle. 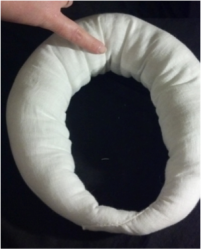 Next up was the unterhaube. I based the design on the 14th Century St Bridgit cap I have previously worn with my gothic era dress. This is made of two pieces of linen with a center seam and a bottom binding that turns into ties.

I then made the piece of fabric that goes between this assembly and the stuechlein to smooth everything out. (I’m sure there is a name for it but I don’t know what it is.) This is a piece of linen 16” by 25”. I was happily surprised by how well everything sticks together with just a few well placed tucks. This piece of fabric is tucked around the wulst as well to help hold everything together. 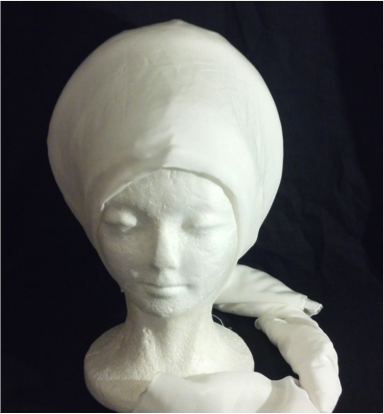 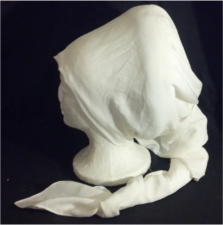 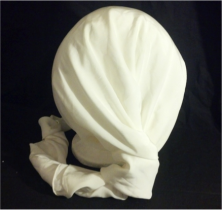 On my next version I am going to play with different sizes and shapes of wulst to see just how outrageous I can make it and try to find a very fine silk with stripes for the steuchlein.

These images from woodcuts of the time show the Landsknecht mercenaries sporting the large style and abundant ostrich plumes. 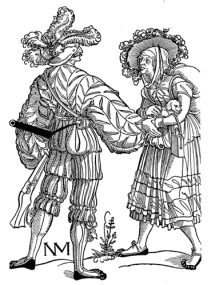 This image of Emperor Maximilion I shows a hat medallion on the center front of his tellerbarret and the accompanying pictures is of a hat medallion depicting Emperor Charles V. 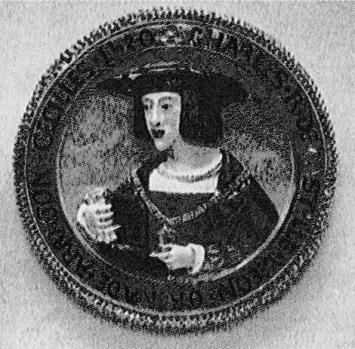 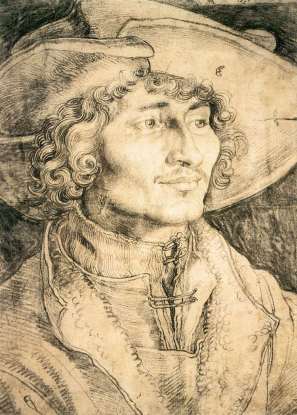 How I made mine

I started with two layers of buckram cut into a 21” diameter circle. I stiffened the edge with wire I had in the garage, I don’t know the gauge or composition, by encasing the wire in bias tape and sewing to the buckram. The inner diameter is an oval about 5” wide and 7” long. I guessed and used trial and error to find the right size.

I then cut two 22” diameter circles of my face fabric and one of linen for the lining on the underside. After cutting the slashes into the bottom layer I sewed all three together and cut the center hole. The buckram and wire piece is then inserted through the center hole.

To make the crown I cut 21” squares of my face and lining fabric, cut the slashes into the face fabric and sewed them together most of the way around, turned them right side out and sewed the remaining opening closed. The four corners are then folded into the center where they are sewn to the lining to stabilize them. This leaves a 13” square that is then sewn to the brim and the basic hat is complete.

My adornment includes both natural and dyed ostrich feathers, a couple peacock feathers, and various medallions. The bone wheel piece on the top is inaccurate but I had it and liked the look.

Unfortunately I didn’t take progress pictures as I didn’t make it with any intention of doing a process write-up.  Lesson learned! 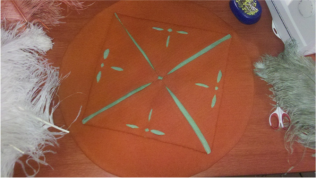 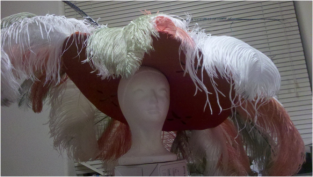 Final Tellerbarret before medallions and other decorations