Lengberg Castle, located in southwest Austria, was built by the earls of Lechsgemünde beginning in the late 12th century. During an extensive reconstruction in the summer of 2008, a vault filled with waste was found beneath the floorboards of a room on the second story of the castle, where it was likely left during a 15th century reconstruction.

Due to dry conditions in the vault the organic waste, mainly consisting of worked wood, leather (shoes) and textiles had been extremely well preserved, and four of the linen fragments resemble modern bras. The criterion is the presence of distinct cut cups – in contrast to antique Greek or Roman breast bands, simple strips of cloth or leather wound around the breasts and designed to flatten rather than enhance. Of note, none of the garments found retained skirts or any other large pieces of fabric. Presumably those were removed to be remade into other items.

The extant “bra” consists of two cups, each made from two pieces of fabric with a center-joining seam, mounted into a body of slightly coarser material with lacing eyelets on each side and attached straps. Remnants of needle lace, or perhaps sprang as is found on one of the other garments found, is seen at the center top of the garment.

Pictorial and literary references to under garments are uncommon but with the discovery of the Lengberg Bra more information has come to light and put some of the references in context.

Henri de Mondeville, surgeon to Phillip the Fair, wrote in his medical treatise Cyurgia (1306-1320) regarding decreasing bust size “Some women unable or unwilling to resort to a surgeon, or not wanting to reveal their indecency, insert two bags in their chemises, adjusted to the breasts, fitting tight, and they put them [the breasts] into them [the bags] every morning and compress them as much as possible with a matching band. Others, like the women of Montpellier, compress them with tight tunics and laces...”.

In an excerpt of a satirical poem written by an unknown fifteenth-century author from southern Germany, called “Meister Reuauß”, we can read the following:

Many [a woman] makes two bags for the breast, with them she roams the streets so that all the guys look at her and see what beautiful breasts she has got; But whose breasts are too large makes tight pouches so there is no gossip in the city about her big breasts.

Below is a close up of a depiction of a tailor by Konrad van Ammenhausen, in 1467. It shows that he is making what appear to be under garments, with inset cups. 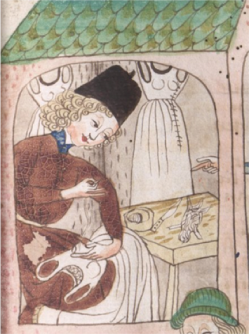 This potter, depicted on a 15th-century handmade card deck commissioned by Ladislaus the Posthumous, King of Hungary and Bohemia and Duke of Austria from 1453 to 1457, shows a woman in her underdress with well supported breasts. It was found among the collection of art treasures of Archduke Ferdinand of Tirol in castle Ambras, Austria. 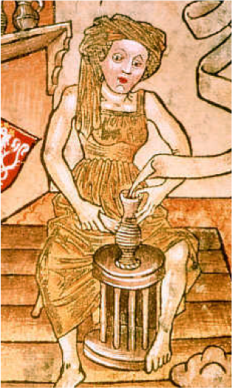 As a large busted woman I have struggled with my 14th-15th century clothes fitting properly, especially through weight fluctuations. Wearing a modern bra under period clothing has always bothered me, from both an aesthetic and re-creation point of view, so I was eager for an alternative. In the past I have tried basic breast bands but while they compress the bust they provide no support and are uncomfortable. When the first reports of a medieval “bra” came out I was immediately intrigued but have only lately attempted to make my own.

I started with measuring my bust, ribcage just under the bust, waist, and the length between those measurements. Through some trial and error I found the proper placement and shape for the cups. I followed this with strap placement and added a skirt. As the extant example no longer has a skirt attached I based my measurements for that on pictorial evidence and personal preference.

The cups are made of two pieces of linen, with a vertical center seam then set into cutouts in the body of the linen underdress.  While this is certainly the strangest pattern I have ever made, it is very effective. 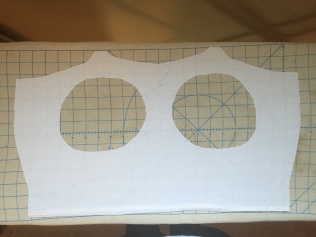 The cups are sewn together by hand with a running stitch then the seam is rolled and hand felled. The same technique is used to set the cups into the body. The straps are straight pieces of linen, whipped stitched with the raw edges turned in. They are then set onto the front and back of the body. The raw edges of the entire garment are rolled and whip stitched to bind the edges.

After the body was constructed I hand sewed eyelets 1” apart from the top edge to the bottom of the body. The eyelets are through the rolled edge for stability and are sewn with silk buttonhole thread for strength and ease of lacing.

I then attached the skirt with a simple gather to encompass the larger skirt to the smaller body. The joining seam is also done with a running stitch then rolled for a felled seam and a simple whip stitched hem.

Overall I am very pleased with the support and comfort the “bra” provides and will certainly make more. The next version will have a sprang panel over the sternum as I believe that will add comfort and mobility. Unfortunately I did not have the time to learn another new skill for this competition. Next time! 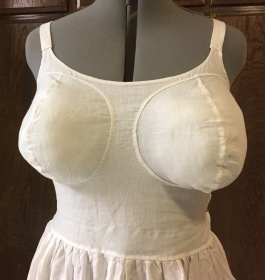