A Fez of Maintenance

One of the things that I love about the SCA is the “Cap of Maintenance” as an article of regalia for those elevated to the Order of the Pelican.  (Here is my recreation of a 14th C. Bycocket Cap of Maintenance: https://historicalheadwear.wordpress.com/2016/08/11/a-14th-century-cap-of-maintenance-bycocket-hat/)  So, when a friend who does a Persian persona asked for a “Fez of Maintenance” for her Pelican elevation I was completely on board!

The fez, also called a tarboosh, is a truncated conical hat, usually red, made of wool felt that has been worn since ancient times.  Most hats in medieval Persia were more rounded than a modern fez but I don’t know the proper name for it so fez it is.

I used the following depictions in medieval Persian art as inspiration. 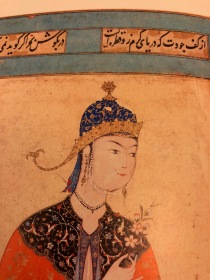 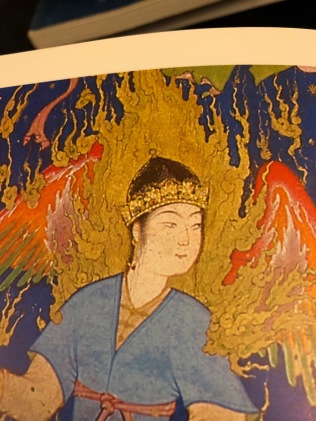 And look at this amazing ermine coat!  I did not expect to find any evidence of ermine in Persian art.

I started by laying down four layers of wool roving in perpendicular layers then placed a slightly trapezoidal resist of stiff canvas down.  The overhanging parts are then folded toward the center and another four layers are arranged to completely cover the resist.

The loose wool is then sprinkled with soap (I use Dr. Bronner’s liquid soap) and a misting of water.  I then slowly and gently pat the fluffy pile until the fiber start to absorb the soapy water.  After some time of this you can then become more aggressive with the pressure and start using a circular motion to start bonding the fibers together.

Once the fibers felted enough to stay together I cut open the bottom and removed the canvas resist.  That was followed by more vigorous manipulation until I was able to place it onto a form.  (In this case a handy cooking pot.) 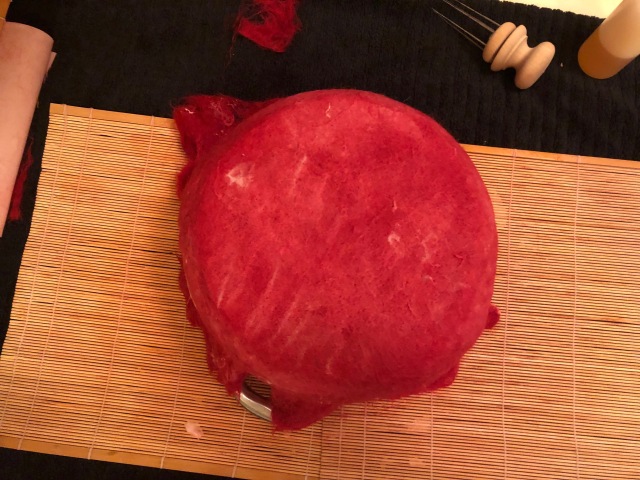 More rubbing, more soap, more water (alternating hot and cold) and eventually it achieves felt!  I then transferred it to a smaller form (a large measuring cup).

At this point I was able to continue shrinking it on an even smaller form. 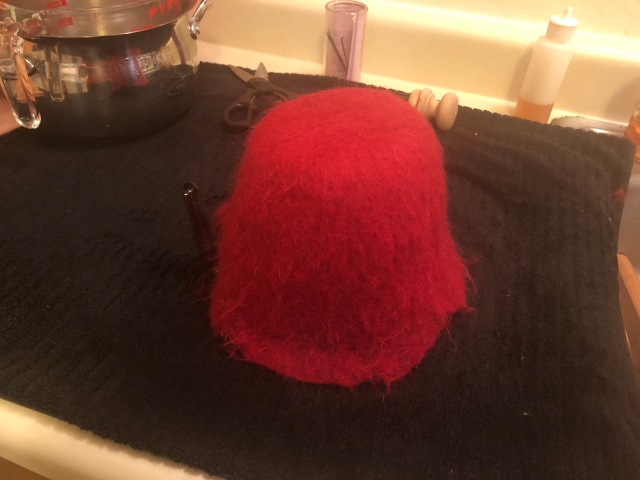 Once it was the size and shape I wanted I let it dry for a couple days then trimmed the bottom to be even.

I didn’t want to put fur on the hat because I thought a silk scarf would look more appropriate but I wanted to keep the ermine look.  Potato stamp to the rescue!

The ink I used to stamp the silk bled more than I expected so unfortunately the ermine spots are not crisp and clean but it still gives the impression.

Thank you Mistress Margaret Grym for inspiring me to make something I had never done before!