Hedeby (Old Norse: Heiðabýr; German: Haithabu) was an important stronghold in Viking Age Denmark from the 8th-11th centuries CE and, along with Birka in present-day Sweden, it was the most important Viking trading center in Europe.  During this time it flourished under the control of Danish Vikings.

Hedeby is located near the modern city of Schleswig, Germany on the Jutland Peninsula, but it was Scandinavia’s southernmost trading port in the Early Middle Ages.  Due to its favorable position at the nexus of the Frankish Empire and Danish Kingdom, as well as the Schlei River which connects to the Baltic Sea, the town of Hedeby attained great wealth as a mercantile settlement with extensive trading ties to western Europe, Scandinavia, the Slavic and Byzantine east, and the Arab World.

The first written records of Hedeby date to Frankish annals from 804 CE when Charlemagne, King of the Franks, awarded his Obotrite allies former Saxon lands following the Battle of Bornhoved in 798 CE.  Christianity arrived in Hedeby around 820 CE, although it is thought the majority of its inhabitants remained pagan until at least the 11thcentury.  Hedeby continued to grow rapidly in the 9th and 10th centuries as trade with the Varangian Rus and the Byzantine Empire increased.  At its height around 900 CE Hedeby encompassed an area of around 60 acres with a population of approximately 1,500 people.

The merchants of Hedeby imported a wide selection of raw materials which in turn became the backbone of an array of craft industries.  Ore from Sweden, soapstone from Norway, ceramics from the Rhine River, pots from the Baltics, and luxury textiles from Byzantium have all been found in the archeological sites of Hedeby.  Hedeby was a manufacturing site for glass and amber beads, textiles, shoemaking, smithing, and ship building.  Historians and archaeologists believe Hedeby was a major nexus of import, export, and transit trade in Northern Europe.

Hedeby declined as a major emporium in the late 10th / early 11th century as a result of political, economic, and environmental shifts. The nearby city of Schleswig grew in importance as the Schlei River leading up to Hedeby’s harbor became deeply silted-up with sand. In a protracted period of conflict between Norway and Denmark from 1048-1064 CE, Harald Hardrada of Norway sacked Hedeby, setting the town and many of the ships in its harbor on fire.  Snorri Sturluson, the renowned Icelandic historian and poet, later mentioned this event in his Heimskringla. In 1066 CE Hedeby was sacked by Slavs, forcing the residents to relocate across the Schlei River to Schleswig, which took over Hedeby’s role as a mercantile center and conduit of international long-distance trade during the Middle Ages.

The serkr found in both the graves and harbor are made of linen, most are undyed and two were dyed with walnut shells.  While there is no entire extant garment most researchers agree that the evidence shows the garment was made of rectangular panels with tapered sleeves, a large rounded neckline, and side gores.

I used bleached white linen (3.5 oz. from www.fabric-store.com), cut with rectangular construction, a rounded neckline, angled sleeves, and side gores.  I sewed all seams with a back stich followed by a rolled whip stitch using white cotton thread.  The hems, neck, and cuffs are rolled and whip stitched.

Stitches:          running and buttonhole for seams, whip for hems

While there are large pieces of smokkr dresses in both grave and harbor finds no full extant pieces have been found.  Most fragments are of wool but there are also pieces that appear to either be lined with linen or a second linen smokkr was worn under the wool one.  There is also evidence of both wool and linen being used for the strap loops based on remnants found with brooches, however it is unclear if the loop material was the same as the smokkr itself.

An interesting aspect of one large extant piece is what appears to be an external dart, or perhaps a repair of some kind, that was then covered with a decorative braid, as well as the fabric showing wear in a manner that could be explained by the use of a belt. 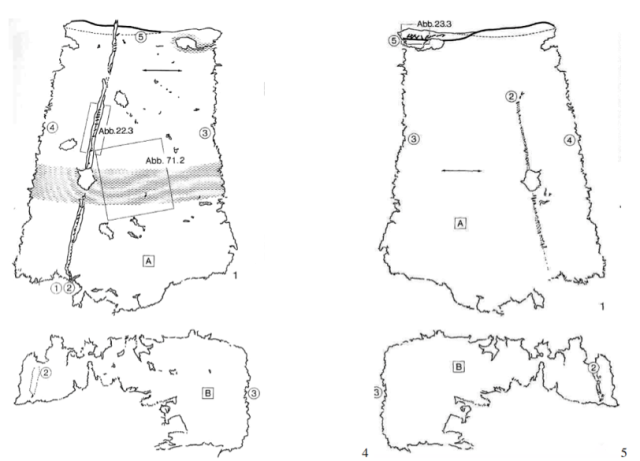 I chose to make mine from wool that I dyed with madder root.  Unfortunately my dying skills are not great and the color did not come out evenly.  I used silk thread dyed with woad (purchased) for all stiches.  I used a running stitch followed by a buttonhole for all the seams and a whip stitch for the top and bottom hem.  I made my strap loops from the same bleached linen as the serkr and finished with a running stitch in white cotton thread.  In using a three panel design I put the back strap loops on the center back seam instead of directly opposite the front loops.  I have no evidence of back strap placement but feel this will wear better over time. 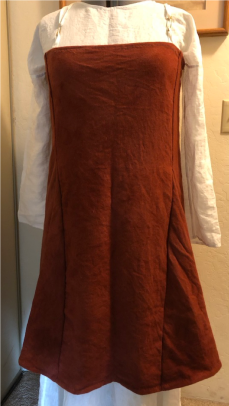 A portion of what appears to be a basic pillbox hat was found in a former well at Hedeby.  The extant piece is of 2/2 twill with a curved seam and appears to have been heavily worn before it was discarded.  A very similar hat was found in Leens, Netherlands, from about the same timeframe.  Given the known trade routes and that this basic hat shape had already been in use since Roman times it seems likely that it was a common pattern.

Leens Hat Find, Journal of Archeology in the Low Country

I made my hat from plain weave scrap wool and commercially dyed wool thread.  The pattern is just an oval the circumference of my head with a rectangular band.  All seams and hem are done with a basic button hole stitch.

Antler combs are common in most graves in the Viking world, including at Hedeby.  The most common style is a single comb made from multiple plates, riveted together with bronze pegs.

My comb is made from white deer antler as it is more readily available in North America.  I started with a half rack and cut a piece from the straight center section for the tooth plates and one of the tines for the joining plates.  Following much sanding I roughly pieced them together.

Once I had the basic shape I was looking for I soaked the pieces in water overnight to soften them.  After softening I clamped the pieces together with flat pieces of wood and let it dry overnight to align the plates.  I riveted everything together with brass wire after drilling holes.  Once the plates were riveted in place it was time to cut the teeth.  I placed the comb in a vice to cut the tines.   I did the first few cuts just freehand but did the rest with a metal ruler as a straight edge with much better success.  My teeth aren’t as fine as those of the extant pieces but I believe with practice I will get better. 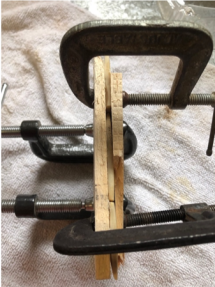 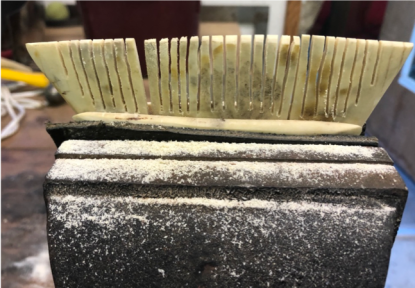 The final step was scribing in the decorative lines, final sanding, and finishing with oil. 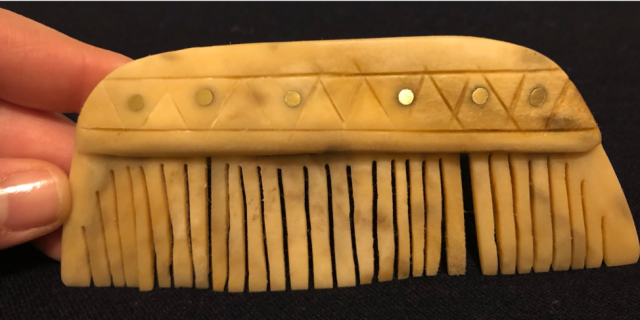 *CAUTION* Always wear a respirator and eye protection when working with antler or bone.  The fine particulate is a known carcinogen.

The excavations at Hedeby uncovered several long wooden objects that researchers now believe to be the handles or frames of cloth bags.  Unfortunately the fabric has disintegrated in most cases, however there are traces of textile remnants attached to some.  In looking at the wooden pieces, minor textile fragments, and a similar extant bag made from antler and hide from a Sami settlement we can extrapolate the use of these wooden pieces. 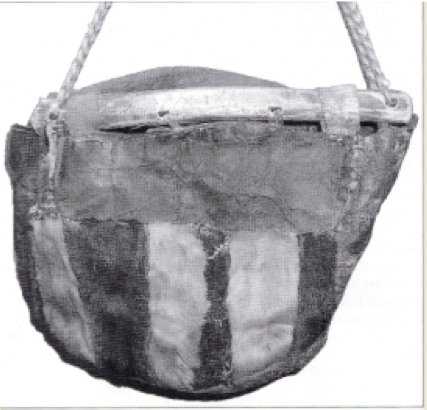 To create mine I used oak from my woodpile.  I started with a piece that had a good, straight, grain and cut it to the approximate size of the pair of handles.   From there I refined the shape, drilled wholes for a strap and slots to attached fabric.  The final steps was to cut the piece in half to create the matched pair of handles.  They are finished with olive oil, although linseed or flax oils would have been more appropriate I used what I had on hand.

Cutting the jagged top on the second set was a bit more difficult but nothing a vise and a good saw and some files can’t handle.

Bone needles appear in both graves and in settlement excavations.  They were possibly used as clothing fasteners and likely for naillbinding.  Size and shapes varied widely.

I used a cooked and well cleaned cattle bone, sawn into lengthwise pieces.  I then sanded the bone until I achieved the shape I wanted, drilled a small hole in the rounded end, and oiled for the final finish. 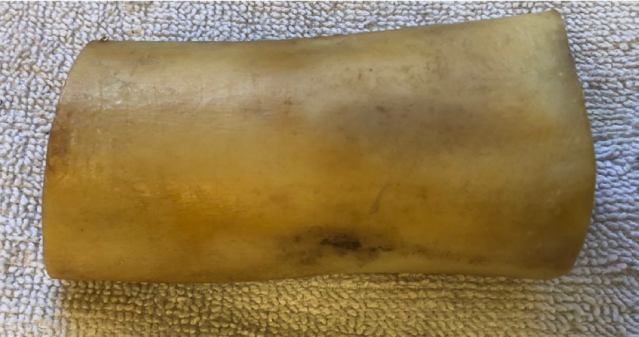 *CAUTION* Always wear a respirator and eye protection when working with antler or bone.  The fine particulate is a known carcinogen.

Numerous glass fragments have been found in excavation at Hedeby, including many beads.  Based on known finds it is likely that some glass items were made in Hedeby from raw materials imported from the Near East and Byzantium and other items were imported as finished products.

Most glass beads were round , cylindrical, or disk shaped although there are a few examples of more triangular or conical beads.  Colors varied greatly as did decoration/design.  The beads were likely made in a beehive glass furnace, one has not been excavated at Hedeby to date but they have been found in other Viking Age settlements.

Unfortunately, I do not have a beehive glass furnace (yet!) so my beads were created with a modern gas torch.

Combs from Antiquity, the Middle Ages, and Renaissance, n.d. http://www.larsdatter.com/combs.htm.

Jesch, Judith. Women in the Viking Age. The Boydell Press, 2006.

Tait, Hugh. Five Thousand Years of Glass. Published for the Trustees of the British Museum by Britihs Museum Press, 1995.

← The Lengberg Castle Bra
A Fez of Maintenance →